Toroidal Field coils are “D” shaped coils whose core task in the ITER device is the confinement of plasma.The toroidal field (TF) magnets produce a magnetic field around the torus, whose primary function is to confine the plasma particles. The ITER toroidal field coils are designed to have a total magnetic energy of 41 gigajoules and a maximum magnetic field of 11.8 tesla. Electrically connected in a series for an operating current of 68,000 Amps The coils will weigh 6,540 tons total; besides the vacuum vessel, they are the biggest components of the ITER machine.They are composed of a winding pack and a stainless steel coil case.The coils will be made of cable-in-conduit superconductors, in which a bundle of superconducting strands is cabled together and cooled by flowing helium, and contained in a structural jacket. The strands necessary for the IITER toroidal field coils have a total length of 80,000 kilometres.

ELYTT Energy is member of one international consortium, together with ASG, Italy, and Iberdrola, Spain; responsible for the manufacture of 10 Winding Packs for the Toroidal field coils.

The WP is 14.7 m long, 8.7 m wide and 826 mm thick.  It is built of 7 individual D-shaped double pancakes (DP) of which the central 5 are regular and 2 are tapered at the inboard part of the Tokamak to give a wedge shape to the WP.   Each regular DP contains 22 turns of conductor distributed on two layers

Each WP is made of a cable in conduit conductor (CICC), made of a 2 mm thick stainless steel jacket and a cable built of Nb3Sn superconductor and copper strands.   The conductor is placed on the grooves of a so called Radial plate (RP), which is used to withstand the Lorentz forces acting on the conductors and to accurately place them

The insulation machine must be capable of applying 7 layers of insulation AFTER the heat treatment of the Nb3Sn superconductor, where the maximum allowable strain to the conductor is 10-3

Twelve independent trolleys are used for lifting, wrapping and descending the conductor.

Then several layers of kapton and glass tapes are applied for the DP ground insulation. The insulated DP is introduced in an impregnation-vacuum mold and it is VPIed with resin coming from a Resin Mixer. After impregnation the impregnation-vacuum mold counts with resistors to cure the resin in a controlled way in a process that takes several days. Special care must be taken in the VPI and curing process as the used resin (cyanate ester) might induce exothermal reactions.

Cured DPs are stacked to form the WP and then ground insulated and VPIed with the same concept as for the DP. Before VPI, the conductor terminations are brazed between them and termination protection covers and structure is installed. 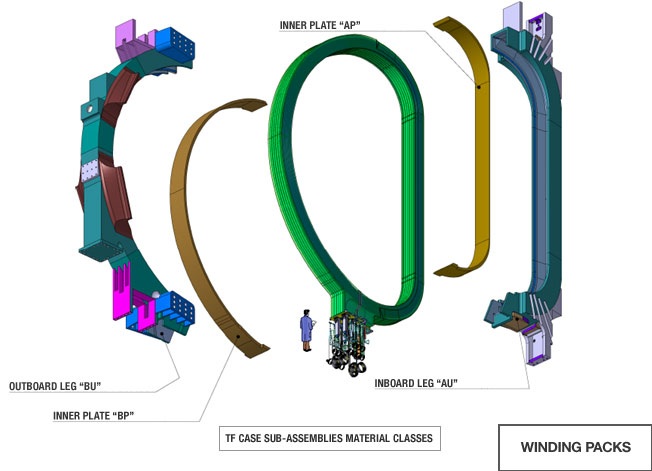